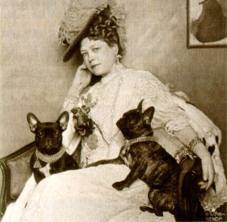 French Bulldogs were bred to be a woman’s companion and they live up to that heritage. In the late 1800s, English Bulldogs were often bred in a Toy variety, many were not much over ten pounds! They had a variety of earsets – rose, bat and prick. With the Industrial Revolution, many lace workers immigrated to France, taking the little bulldogs with them. There they crossed the dogs with Pugs, terriers and other small breeds, creating the early French Bulldog. Frenchies became the darling of society and were often seen on the arms of prostitutes as they walked the boulevards of France. As is often the case, fashion traveled upwards and the wealthy soon clamoured to have this charming little dog. Many were exported to the United States, where the bat ear was “set” by American enthusiasts. In 1897, the first French Bulldog Club of America specialty show was held at the Waldorf Astoria Hotel in New York. Frenchies were all the rage! As many know, a French Bulldog was lost on the Titanic and a Frenchie, Ortino, was the beloved pet of one of the daughters of the Russian Royal family. His remains were found where the entire family was executed.